My First Experience from Mumbai to Shirdi Padayatra with Sai Palanquin.

Om Sai Ram! I, Ranjan Gunjal, would like to share my experience of first ever Mumbai-Shirdi Padayatra which took place in December 2015.

“Om Sai Ram” were the first letters which I learnt when I started my first Shirdi Padyatra. Sai devotees used to call each other as “Sai Ram” or “Sai”.

Many times travelling on Mumbai Nashik Road, I used to see many Sai Devotees walking towards Shirdi more often with “Sainchi Palkhi”. I used to get envy seeing those people & wondered whether I will have an opportunity to have a similar experience in future.

About a 6 months back, suddenly, a thought came to my mind about going to Shirdi by walking (Padayatra). I started online searching for Mandals which organizes such kind of Padayatra’s & got some references through ‘www.shirdipadyatra.com’ (http://www.shirdipadayatra.com/mandals/om-shri-sai-sevak-padayatra-mandaltrust/). After going through the details of various Mandals from the list, I selected one Mandal from Vikhroli Park Site namely “Om Shri Sai Sevak Paadyatra Mandal” and immediately contacted president of Mandal – Shri Anil Devsekar (Mob. No. 8655606160) who more than welcomed me & invited at his residence for giving further information on Padayatra. Initial meeting for Padayatri’s was organized on Sunday 6th December 2015 at Vikhroli Park Site for completing certain formalities including filling up of Forms, providing important information about Padayatra especially to new entrants.

Padayatra started from Sunday, 13th December 2015 with approx. 50 padayatri’s from Vikhroli Parksite & other areas. I was surprised to know that from Andhra Pradesh 7 sai-devotees are joining Padayatra from Vikhroli, since 4 years. I also came to know that in the year 2014, a couple from Malaysia joined the Padayatra on the last day in Shirdi with this Mandal. I could not join the Padyatra from Vikhroli due to certain exigencies & joined the Padayatra from Thane. We all were wearing of White Cloths throughout the Padayatra. The distance to be covered from Vikhroli to Shirdi is in the range of 240 Kilometers which is required to be covered in a period of 7 days. Distance to be travel is on a lower side for the first & the last day. Hence, average distance to be travelled from 2nd to 6th days is between 40 – 45 Kilometers / day.

1st Day: Distance to be covered was limited to 25 Kilometers. Since I joined from Thane, I had to walk only 10 Kilometers on 1st day. Overnight stay was at “Lodha Dham” near Bhiwandi where very good facilities were provided to pilgrims by Lodha Foundation.

2nd Day: Distance of 40 Kilometers was covered on 2nd day. At the end of the day, I was exhausted.

3rd Day: This was the most difficult day as we covered the distance of 45 Kilometers which included Kasara Ghat with a distance of 6 KM’s. We had started the journey at 6:30 AM & reached the destination at 12:00 midnight. That day, I thought that it is very difficult to complete the entire Padayatra of 7 days.

4th Day: Things improved from 4th day onwards as by this time body was getting used to the daily walking habits. I did not have much of the issue later on. However, it was difficult to keep the pace with other regular Padayatri’s. To take care of this issue, I used to start early along with Palanquin so that I am not left far off when all Padayatri’s are reaching to the destination.

7th Day: We reached Shirdi on Saturday evening. After being in queue for 2 hours, we got nice Sai Darshan & the purpose of Padyatra was fulfilled. I was satisfied with Sai’s darshan. Like our Palanquin, there were lot of other Palanquins arrived on that day, so heavy crowd was in Shirdi.

There used to be Sai’s Aarti 4 times a day in entire duration of Padyatra. The arrangement done by Om Shri Sai Sevak Padyatra Mandal was excellent. In the morning, they used to provide hot water for bath (on most occasions) which was something special. During whole Padayatra, Mineral Water was provided to all. Breakfast, Lunch & Dinner were provided throughout the day. Quality of meal (Mahaprasad) provided was really good. Senior Members were really caring. Shri Anil Devsekar was very supportive especially towards new Members. Rajan, Shuhas, Appi were always ready for help. Safety of Padayatri’s was taken care very well. Gopal Phadke (Treasurer) is a Gem of a person & we never heard a “No” from him for anything & everything we asked for. Other Senior Members like Moreshwar Patil, Manohar Jadhav, Sharad Parkar were a friendly group. “Bhavoji”, Senior most person of the Mandal, is a very kind person & used to enquire other Padayatri’s for any help required.

Padayatra to Shirdi was one of the great experiences I had in my life. This experience has made me somewhat humble in approaching towards life. Some days, you may not get the bath! Sometimes, you may not get washrooms to relive yourself & you have to use open areas. Padayatra’s experience taught me that if you have the will, no target is difficult to achieve. After successful Shirdi Padayatra, I went on to complete “Powai (Mumbai) Half Marathons” as well as “Standard Chartered Mumbai Half Marathons” of 21 KMs! Many thanks to Organisers who made this event of Padayatra memorable for all us! I would like to go to Padayatra with Om Shri Sai Sevak Padyatra Mandal in next year too!!! 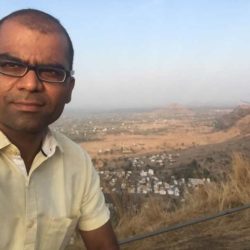